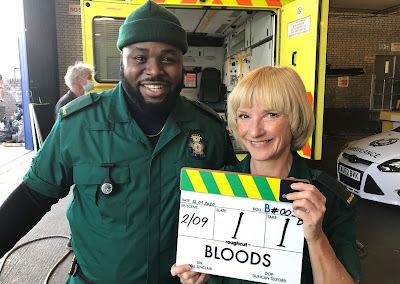 The six-part Sky original is shot on location in South London and follows tough-acting loner Maleek (Kayo) and his over-friendly divorcee paramedic colleague Wendy (Horrocks). Their partnership looks dead on arrival. But pretty soon they’re giving each other life support. An ensemble comedy, set within the fast-paced, never-ending rush of 999 call outs, Bloods charts Maleek and Wendy’s struggle to gain the respect of their fellow paramedics. Each 30-minute episode will bring humorous relief to the world and characters of the paramedic service and recognises the talent of those who put their own lives at risk in an emergency to help keep us safe and healthy.

Samson Kayo said: “I’m super excited to show the world Bloods especially because I almost became a paramedic. Lucky for the NHS, I chose to play the character instead! I’m looking forward to hopefully bringing a bag of laughs to Sky with the lovely team at Roughcut who have some quality comedies under their belt!”

Jane Horrocks said: “I am very much looking forward to working on Bloods and being paired with the extremely funny Samson Kayo. I know nothing of the world of paramedics, but maybe I need to overcome my fear of blood before I start.”