The Masked Singer is set to return to ITV with a fresh cast of 12 celebrities, complete with new, ever elaborate and flamboyant character costumes.
Characters that will be singing and concealing their identities as they attempt to stump viewers and the panel alike on who they could possibly be line up as follows:
Alien who hopes to dazzle earthlings with out of this world performances
Sausage who is all wrapped up in a newspaper BUT will Sausage be the talk of the town?
Dragon is a cutie but, when they open their mouth to sing, can they bring the fire?
Seahorse is a beautiful marine creature who will be hoping their singing goes swimmingly
Viking is armed with a sword and wearing a helmet and clearly taking this battle seriously!
Blob has many eyes but will all eyes and ears be on Blob?!
Harlequin could be a joker in the pack or a stunning singer
Swan will be confidently swanning into town but when swan sings will they ruffle feathers?
Bush Baby is an adorable looking cheeky fluffy fella but will the voice match the cute appearance?
Badger steps out of the sett but will this badger stand out from the crowd
Robin – this rockin' Robin will be hoping to deliver tweet harmonies and show that he's not just for Christmas but planning to go the distance.
Grandfather Clock is the original Tik Tok and will be making every second on stage count. 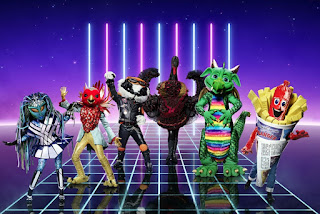 This new season sees a brand-new panellist as BAFTA award-winning comedian Mo Gilligan takes up a chair and the challenge of figuring out 'who's that behind the mask?'
Host Joel Dommett is back to preside over the unique guessing game that gripped the nation at its first outing. Davina McCall, Rita Ora and Jonathan Ross will also all resume their celebrity sleuth roles. 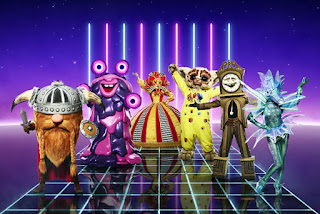