The Serpent - Interview with Tahar Rahim and Jenna Coleman 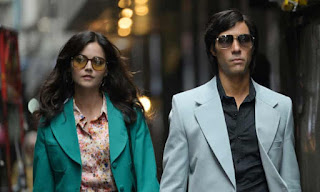 
Who do you play?
I'm playing Charles Sobhraj, who is known to be a killer but also a conman - a very manipulative man, a narcissistic, and as sadistic as he is evil. Charles was born in Saigon, before moving to France when he was a kid with his mum, where he started his petty criminal career. At some point he decided to go back to his roots and move back to South East Asia to the 'hippie trail', where he started to con people and the murders began.
What attracted you to the role?
When I was 16 my brother was reading a book - this big thick book by his bed, and he was so into it. It was The Life And Crimes Of Charles Sobhraj - so I read it too, and I became fascinated by it. I think as human beings we're fascinated by - in this case - killers, but also by evil in general. It's fascination and repulsion.
I was a young guy who wanted to be an actor and after reading this book I thought, I'd like to play this guy. There's so much mystery. Fast forward to a few years ago, when I had an email from my agent saying Tom Shankland and Richard Warlow wanted to meet with me about playing a murderer called… Charles Sobhraj. I then went to a meeting with Tom and Richard, and I told them about the book and wanting to play Charles Sobhraj. When I talked with Tom more recently he said that day he didn't know if I was lying or not, but that he said to himself "this guy is our Charles - because we never know whether he's lying or not, but we believe him." But I was not lying!
What preparation did you do to play Sobhraj?
I needed to understand in a way what makes a murderer, I wanted to start from there. I read a lot of books on the subject, plus I spoke with some experts. I did my homework.
When you're playing someone who's alive and not especially famous, the key thing to do is to catch the soul. From there you can create everything else... but it's the soul, that's a hard thing to catch. Especially with Charles - it's not easy.
What was the biggest challenge for you?
It wasn't easy to be seductive and mysterious enough to draw people in, but at the same time be scary enough for the audience. You have to be aware that there's an audience watching you, but at the same time you have the characters who are in front of you, who in most cases can't be scared of Charles - otherwise he doesn't con them. It's a thin line to find. You can't hide behind the words, in this case. It's all about what's inside and about the way you look.


Who do you play?
I play Marie-Andrée Leclerc, who is a real life person. She is from Quebec in Canada, and she's lived a very normal life with a very big family. She is very religious, devout, has never left her country before. She's nearing her 30s and I think she is craving some form of adventure. So she leaves her country for the first time and she meets Charles Sobhraj. He is a man like she's never met before. He represents everything to her that is exciting and everything she feels she hasn't had in her life so far, so she kind of becomes obsessed. I think she's a real romantic and she places so much faith and love in him, and it becomes a kind of obsessive delusional addiction with him. The reality is very, very different to the narrative that she creates.
What made you want to play her?
The script itself was so dextrous and layered. Initially you meet this character called Monique (Marie-Andrée's alias, when she's in disguise with Charles) who's this mysterious, unknowable and interesting character. And then underneath there's Marie-Andrée, the person who she really is. I was really drawn to the challenge of playing Marie-Andrée, this unconfident lady who doesn't have much self-esteem, becoming this other person. The constant play between Monique and Marie-Andrée felt like such complex material. But also the story - it reels you in completely. And the fact that it's true. There's something about the hedonistic world of the 1970s where you could get lost in a way that you can't get lost in the world anymore. The actions that Charles could commit, a lot of them thankfully couldn't happen today either.
The 1970s hippie trail was a time and place where people went to lose themselves. Marie-Andrée reinvents herself entirely. She is able to pretend and commit to being someone who she's never been, and there's something really addictive about that.
What research did you do?
We've got access to Marie-Andrée's diaries, and a lot of biographies, and there was so much reporting about the crimes that there was a wealth of material for research. Marie-Andrée's backstory in particular was so interesting in terms of understanding how and why somebody could fall into the charm of Charles and into that world. Within a short time of meeting him she was already witness to his crimes. It's like, in the space of that time how can a person become so blinded so quickly? Having the wealth of material about her previous life before she met him was so useful.
What were the challenges of the role?
Probably one of the toughest things to get was Marie-Andrée's voice. Both her French-Canadian accent when speaking English, and then her French-Canadian accent when speaking French. To try and find that was really hard… but again we can hear her interviews so I could hear her real voice in press interviews and her tapes from prison. I was learning the French language from scratch, and I'm Northern and before this job I literally could not roll my Rs, so it's been a vocal journey! I can now say 'très bien' correctly, which actually took me months. It became a bit of an intense French boot camp of training my mouth to make the noise 'trè' and many things like that. I felt like I was in My Fair Lady, having vocal training to change the movement of my mouth.
Many of the actors I was filming with are French themselves, so to try and work authentically within that realm was a big challenge. It was probably professionally one of the scariest challenges - to go from learning it from scratch to within two months being on set opposite Tahar and speaking in French. A good challenge, but a big challenge.
How much do you feel Marie-Andrée was a victim, and how much do you feel she was an accomplice?
I find her so fascinating. She has so much faith in love and is such a romantic that upon meeting Charles she kind of embroils herself in her own incorrect vision of what she thinks this environment is. She constructs her own false narrative and is so delusional. I think that's the only way she can remain in the world, knowing underneath what terrible, despicable acts are really happening and she is helping him commit. Reading the real Marie-Andrée's diaries, Charles to her is almost like a religion. Everything is about him. She places every waking breath upon the way he treats her - it's an utter, utter fixation.
I do think there's a choice that she makes - and the choice that she makes is to ignore the truth. Because to acknowledge the truth is to put her in a reality that she doesn't want to be in. She would rather exist in her own reality. She has this life and this world with Charles where she's reinvented herself to almost be a person in the magazines she's obsessed with. And the alternative is that she returns to Canada and becomes a receptionist again, and life becomes that bit more greyer.
How was filming in Bangkok?
Crazy, in the most amazing way. The scenery is incredible, and Bangkok has such a frenzy and an energy that it really infiltrates into the series. There's just so much life and culture. It's the hottest place to shoot, though. Wearing a wig in the 1970s in Bangkok is very hot!