COMPETITION: Win A Discovery of Witches: The Final Chapter on Blu-ray 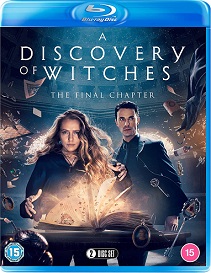 A Discovery of Witches The Final Chapter on Blu-ray  - Released from 11th April
And to celebrate we have a great competition for you and 2 copies on Blu-ray to give away.
Synopsis:
Adapted from Deborah Harkness’ best-selling trilogy of novels, A Discovery of Witches is a bold and romantic thriller that uncovers a secret underworld of extraordinary beings hiding in plain sight for fear of persecution by humans - they are vampires, witches and daemons.
Brilliant historian Diana Bishop (Teresa Palmer) is a witch denying her own heritage. But when she unexpectedly opens an ancient, bewitched manuscript from Oxford’s Bodleian library, she finds herself thrown into the heart of a dangerous mystery, and into the path of the enigmatic geneticist and vampire Matthew Clairmont (Matthew Goode). Matthew is driven to solve the looming threat of the creatures’ decline, but their unlikely alliance to find the book before it falls into the wrong hands - and their deepening relationship - threatens to violate age-old taboos and shake the fragile peace that exists between the species.
In the long-awaited third and final season, Matthew and Diana return from their trip to 1590 to find tragedy at Sept-Tours. They must find the missing pages from the Book of Life and the Book itself before it’s too late. Their enemies are gearing up against them, and a monster from Matthew’s past who has been lying in wait will return for revenge.
See how this epic story ends in A Discovery of Witches: The Final Chapter and experience the journey from the very beginning in A Discovery of Witches: The Complete Saga, featuring all 25 episodes from three seasons.
Dazzler Media presents A Discovery of Witches: The Final Chapter on Blu-ray, DVD & Download-to-Own from 11th April.
Pre-Order from Amazon at https://amzn.to/37fBM0T
For your chance to win just answer the question below.

COMPETITION CLOSED
Terms and conditions
1. Closing date 18-04-22
2. No alternative prize is available
3. When the competition ends as indicated on this page, any and all entries received after this point will not count and emails blacklisted due to not checking this page first.
4. Winners will be chosen randomly and will be informed via email.
5. Entries that come directly from other websites will not be accepted.
Posted by JD at 11:13

Email ThisBlogThis!Share to TwitterShare to FacebookShare to Pinterest
Labels: A Discovery of Witches: The Final Chapter