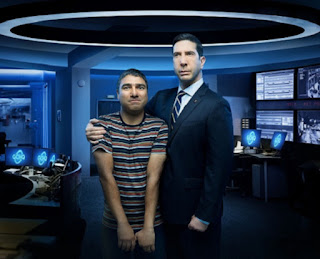 Sky has released a first look image of its upcoming original comedy Intelligence, due to air on Sky One and streaming service NOW TV on 18th February.


Created and written by Nick Mohammed, Intelligence is a workplace comedy set in the UK's GCHQ — a kind of weedier, geekier version of MI5, where they tackle international and domestic Cyber Crime from a desktop.

When an arrogant, maverick NSA agent Jerry (David Schwimmer) comes over from the U.S. to join the team, he enlists an inept and tactless computer analyst Joseph (Nick Mohammed) in a power grab that threatens to disrupt the team's ability to combat cyber terrorism.

David Schwimmer said: "I think you'll find this is the best TV comedy made in the last two hundred years. You can't see my face, but I'm super serious."

Nick Mohammed said: "Given that David is most well-known for his dramatic roles, it's nice to see him finally have a go at comedy. Hopefully it'll lead to more work of this quality"
Posted by JD at 18:31