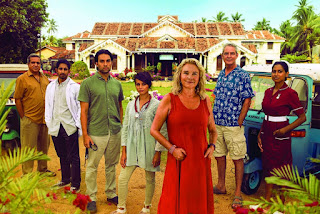 Series overview
The Good Karma Hospital series three finds our tropical Indian hospital busy as ever, with several big new arrivals causing a stir. The team faces their most shocking case yet when one of their own nursing team – young, idealistic Jyoti Gill – survives a violent attack. Lydia and Nurse Mari are particularly affected and struggle to provide the care she needs. Mari has to set aside herprejudices to support her friend, while Lydia must revisit some emotional places in her own past to show Jyoti the way forward.

Dr Ruby Walker faces a tricky dilemma over where her home lies – with her newfound Indian family, or at the bustling hospital? It’s made all the more difficult by her simmering relationship with Dr Gabriel Varma. The series will see the couple get closer than ever before, only to be blindsided by the arrival of a talented, glamorous older surgeon from Gabriel’s past. Can the relationship survive the threat?

Series three also introduces us to a visiting Brit, Ted Dalrymple, an older man on a mission to find a love from his past. As Ruby manages his deteriorating health, she’ll aid him on his quest. Edward’s journey is moving and poignant, showing that it’s never too late to reinvent yourself and follow your
heart, even across 50 years and thousands of miles.

Greg is in for a big surprise this series, forced to reconnect with long neglected family. Can he finally step up to long avoided responsibilities? And after months of being away at medical school, AJ will return to the hospital as a junior doctor, desperate to impress his dad. Can Ram finally be proud of
his wayward son?

The series goes to darker places than ever before, but it is through the bonds of family and friendship – rekindled and strengthened over the series – that the team weather their biggest challenges yet.

Episode 1
After months away with her family, Ruby returns to the hospital for her pregnant sister to give birth. When a life and death medical crisis unfolds, it will force Ruby to see where her loyalty lies. Plus, Greg gets a surprise family visitor.

Email ThisBlogThis!Share to TwitterShare to FacebookShare to Pinterest
Labels: The Good Karma Hospital