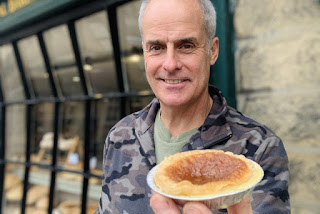 This Morning's resident chef Phil Vickery will undertake a new mission this October as he travels the length and breadth of the nation to discover Britain's Best Tart in a brand new four-part strand of the same name.
Throughout the new series Phil - a firm favourite on This Morning for 21 years - will also discover the history behind some of the best traditional tarts that Britain has to offer including the Bakewell tart, the Manchester tart, the Gypsy tart and finally the Yorkshire curd tart.
Each week Phil will visit the birthplace of these sweet treats and take viewers on a historic journey to the Derbyshire Dales, Manchester, Kent and Yorkshire, where he will meet those in the know who will share the secret recipes that date back hundreds of years. Once equipped with the local knowledge, an inspired Phil will return to the kitchen to create his own version of each tasty tart.

Phil, tell us about this new series and how it came about…

"Well, a couple of weeks ago on This Morning I did an almond tart and I hadn't done a lot of baking on the show for a while, but Phillip [Schofield] and Holly [Willoughby] loved it and said it was really lovely, and on the back of that I was asked by my bosses 'We'd like you to do a thing on Britain's traditional tarts' to which I laughed at first and then they explained further 'the culinary version'. I did a bit of research and narrowed it down to the Manchester Tart, Bakewell Tart, Yorkshire Curd Tart and the Gypsy Tart - which I remember at school! And then we went off and filmed up and down the country, all within Covid guidelines."

What can This Morning viewers expect to see?

"So I do a bit of research, and we go to the place where we believe they do one of the best or the best tart in the area, and it's not so much as judging it, it's going there, looking at what they do, and coming back and making my own version in the studio. I mean some of these tarts have such old recipes, I think the Bakewell Tart one for instance is from around 1870 so you have to modernise things a bit. And for the show I like to be careful with calories and things, so if I can lighten them and make them a lot less heavy then that's what I'll try and do. But also, a lot of the 'old' ingredients you can't get, for example, the Yorkshire Curd tart, to get fresh curds is quite difficult so my version on that tart I used cottage cheese. But also, I am kind of going on a history tour as well, I've definitely learnt things - there's a Bakewell pudding and a Bakewell Tart and I now know the history of both of them now! I'm still learning as I go on these trips for This Morning. Never too old!"

You are a master of a pudding, is this what makes you the best person for this series?

"When I was a young chef I trained in pastry and I had a flair for it. I remember making so much by hand back then; brioche, croissants, danish pastries… everything. And I ended up working for about twelve years mainly doing pastry, and actually a lot of chefs around - I won't name names - but they can't do it. They hate pastry! It's such a finite thing… an extra half an ounce of yeast can destroy bread for instance and 0.5g of salt can make a big difference, so it's very very specific and a lot of chefs don't have the patience!"

Did you have in mind what your favourite tart might be before filming?

"Not really… but I have always liked Bakewell Tart even though I don't really like almond essence, but I make mine without that because I think the natural flavour of almonds is there, you don't need to enhance it. So Bakewell is pretty high up on my list, if I'm being honest."

Do you think the humble tart is underrated or being slightly forgotten about in the UK?

"It is perhaps underrated, but because a lot of them are now so old, I guess people don't see them as fashionable anymore. For instance, in Bakewell they make a small Bakewell tart probably about 5cm across and 2cm deep and because it only had butter, sugar, egg and almonds in it, it was around 2,000 calories! So some are hugely calorific and so for a lot of people they find them too heavy. I tried one and I struggled to sleep that night!"

What kind of tart is your personal favourite to cook and why?

"Well, my personal favourite of all time is an egg custard tart. My mum used to do it for me when I was little and it was a staple in my restaurant too… I used to have a guy that came to my restaurant every Monday for lunch and he once said to me, 'Mr Vickery, if you ever take that egg custard tart off the menu, I'm never coming here again!' and it was always on the menu, so for me, that's my favourite go to. Although my mum still tells me hers is better!"

You are celebrating 21 years on This Morning, how does that make you feel?

"Yes, I am! Do you think I'll get a gold watch?... I'm not sure how it makes me feel because when Denise [Robertson] was alive, she, together with Dr Chris Steele are the longest serving contributors on the show, then I think it's me and Alison… and actually that's rather nice that I've done it for that amount of time and that they still want me! I'm getting on a bit now so I'm very lucky and I'm very appreciative of it. I think I've travelled to 37 countries in total so far for the show… how amazing is that? I've got to do so many amazing things during that time."

What have been your most memorable moments?

"There are hundreds! Just things like closing the Sydney Harbour Bridge early so we could film on top of it was incredible. Then in a catamaran moored outside the Sydney Opera House where I cooked burgers… that was quite special. We also went flying in a seaplane and landed on the Great Barrier Reef. Another time I went flying around Alaska to do the salmon run and watched all the bears coming out, and the whales came right up in front of us. I've cooked in the lowest point of the earth in the dead sea and I've also cooked 11,000ft up in Machu Picchu in Peru, and I remember the air was so thin that the gas wouldn't light and I was struggling for breath! I've been everywhere…"

He added, "The show has absolutely taken me to places I would never have seen or visited without it. Catching crabs in Norway, going to India, going to Hong Kong and then on to Bangkok where we went on the Orient Express from there to Malaysia and we cooked on the train! It's all just been absolutely fabulous. Wonderful memories."

What are your top five ingredients you are never without?

"Well, I grow my own potatoes, strawberries and a few tomatoes so I'm not usually without those for most of the year. But generally the top five ingredients that I am never without are tinned tomatoes, fresh coriander, packed rice, stock cubes and clotted cream!"

What are you likely to cook if you are watching football with friends, seeing your mum or with your children?

"If I was watching football with friends, and hopefully Spurs are winning, I would normally do something really simple like rice with a bit of chilli, simple spoon food. And if I am with my mum I have to ask her what she wants because she's a bit particular my mum and she's a very, very good cook. And she's quite adventurous. My mum and dad stayed with me a few weeks ago actually and they ate me out of house and home! They had a mix of steak and chips, prawn curry, BBQ chicken, they had allsorts. They were eating like there was no tomorrow! As for the the kids, they have flown the nest, but they do come back every now and then and Winnie will say to me 'Oh dad, can we do a quick egg fried rice?' and it's just two eggs in a pan, cooked with basmati rice and soy sauce. She loves that!"

Please credit: 'Britain's Best Tart' will air on ITV's This Morning from Tuesday 27th October at 10am