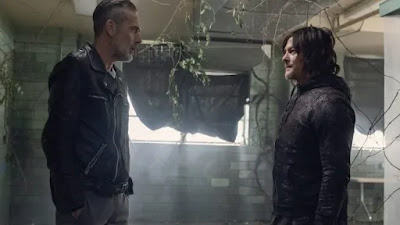 AMC+ will debut the first episode of The Walking Dead's highly-anticipated extended 10th season on Sunday, February 21 - one week ahead of its linear premiere on Sunday, February 28 at 9:00 p.m. ET/PT on AMC. All subsequent episodes will debut early on the premium streaming bundle, every Thursday prior to the episodes' linear premiere on Sundays, beginning March 4.
Last on The Walking Dead, we witnessed the fall of Alpha (Samantha Morton) and the end of the Whisperers War. The Kingdom had fallen, Hilltop was virtually destroyed and Alexandria abandoned to prepare for final battle. Our survivors were trapped and separated from one another. Yet, when faced with almost certain death, they rallied together to fight, killing Beta (Ryan Hurst) and eliminating the threat of the horde.
In these six new episodes, we find our survivors trying to pick themselves up by their bootstraps following the destruction the Whisperers left in their wake. The years of struggle weigh upon them as past traumas surface, exposing their more vulnerable sides. As they question the state of humanity, the state of their collective community, and the states of their minds, will they find the inner strength to persevere with their lives, friendships, and group intact?
Based on the comic book series written by Robert Kirkman and published by Image Comics, The Walking Dead is produced by AMC Studios and executive produced by Chief Content Officer Scott M. Gimple, Showrunner Angela Kang, Kirkman, Gale Anne Hurd, Dave Alpert, Greg Nicotero, Joseph Incaprera and Denise Huth.

Email ThisBlogThis!Share to TwitterShare to FacebookShare to Pinterest
Labels: The Walking Dead