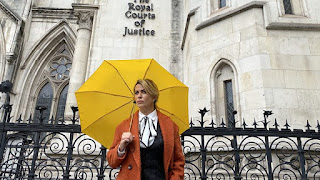 Keeping Faith is back for a third and final series. Where did we leave Faith at the end of series two?
We left Faith at the end of series two asking Evan to leave, and a divorce was imminent. She had come to learn of all his dark secrets and had become embroiled in the dark underworld that Evan was running away from.
What can we expect from the new series?
In the new series you can expect the unexpected and even more secrets revealed. There's a new character who shakes Faith's world just as she's about to get back onto her feet.
New and old characters fight for their family and justice, and Faith's past coming back to haunt her. There are exceptional performances from all the cast and brilliant scripts from Matthew Hall and Pip Broughton.
How is Faith's love life?
Faith's love life is non-existent, she's focused completely on the children and her new law firm.
There are new additions to the cast in this series. What has it been like to work with new cast members?
This series sees many amazing guest leads who have given incredible performances and been part of bringing the third series to new heights.
What can you tell us about Celia Imrie's character?
The character of Rose, played by the amazing Celia Imrie, comes into town like a powerful, menacing force. She has defined Faith but plays on all her fears. A woman with huge guilt, a heavyweight in manipulation with many dangerous contacts, a woman with nothing to lose.
What can you tell us about the court case in series three?
The court case deals with an extremely sensitive subject that highlights many questions. Brilliant performances and storyline. This is the type of case that would either make or break Faith... I think it does both.
How was filming during a pandemic?
It was difficult, it changed everything really, but we were lucky with the stuff we had already shot. It's funny how the new protocols become normal very quickly. The main thing was everyone must stay safe and be vigilant at all times, in and outside of work. We got it done safely, that's the main thing for me.
Each series, the coat has almost been a character in its own right. Which is your favourite and why?
My favourite coat is the yellow mac... it's the go-to, always.
Who has been the most fun on set?
There is no one I could single out, because the cast is small and all are brilliant and funny in their individual ways. Hannah Daniel was particularly good at winding me up to be naughty.
Looking back at the three series as a whole, what's been your favourite memory?
My favourite memory would always be the day we spent on the water in Laugharne. The tide came in and out so fast, the sunset was magical and everyone kept saying, 'wow this isn't work, this is a treat'.
What was your favourite scene to film?
My favourite scene to film was the scene where Faith tells Evan what she knows and tells him to leave at the end of series two. Such a complex, intimate scene that felt almost like a piece of theatre. I really enjoyed having that time and moment with Brad on screen. It was long and tiring to shoot, but the end result is very authentic. Sometimes TV is so fast that scenes are neglected and rushed due to time etc, but this felt like we shot a scene for a film. Again I'm grateful for this.
What's your favourite thing about Faith as a character? What will you miss about her?
My favourite thing about Faith is that she will never give up. I will miss her courage.