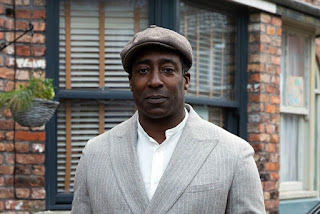 Life is about to get a lot more complicated for the Bailey family as the newest member of the clan arrives in Weatherfield.
Ronnie, Ed's brother, will be played by Vinta Morgan and will walk on to the famous Corrie cobbles next month, first appearing on our screens on Friday 19th February.
Pulling onto the street in his flash sports car, Ronnie is greeted by a thrilled Ed and Michael who take him for a drink in the Rovers. But as the brothers reminisce about the old times, Aggie is clearly on edge and later admits to Grace that she can't relax around Ronnie as he has a habit of leading Ed astray.
Her concerns mount when Ed reveals that Ronnie is looking to move to the area but the reason for his hasty relocation is still shrouded in mystery. With the Baileys still coming to terms with Michael and Grace's baby announcement Ronnie's entrance has come at the worst possible moment for Aggie in particular.
London living Ronnie is the wayward uncle who can be slightly ruthless but irrepressibly charming. At 51, he is single and missing his family. He's done well for himself over the years and as an entrepreneur and investor has a keen eye for business with Lady Luck always on his side where money is concerned.
And with no sign of a woman in his life the ladies of Weatherfield better watch out, it won't be long before this charmer turns his attention to romance.
Coronation Street producer Iain MacLeod says: "Ronnie Bailey is a massive injection of chaos, energy and humour. He is a Jack the Lad that will tip their current cosy existence on it's head and set many cats among many pigeons, up and down the street, much to Ed's exasperation.
In comes Ronnie with a hand grenade with the pin already out and we are all wondering when he is going to drop it and as you can predict on a show like ours he will drop it when it will do maximum damage. It's an exciting time in the Bailey household."
Actor Vinta Morgan whose recent credits include Unforgotten, Ted Lasso and Grace Under Pressure, said of getting the role of Ronnie: "It's so great to be joining Coronation Street. I grew up watching it, I know the characters, I've lived the stories and now, to play my part on the street, I can only say I'm blessed.
In my household it has always been a firm favourite and I'm so thrilled to be joining as this enigmatic character."