Doc Martin will hang up his stethoscope for the final time. 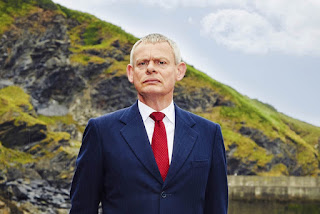 Martin Clunes returns to Cornwall in the last series of the phenomenally successful ITV show Doc Martin to reprise his role as the nation's favourite grumpy surgeon.
Martin Clunes will play as Dr. Martin Ellingham, a brusque general practitioner with a blood phobia, in eight new episodes of the popular drama produced by Buffalo Pictures and set in the picturesque hamlet of Portwenn in Cornwall.
Buffalo Pictures has announced that a Christmas special will be produced to bid farewell to Doc Martin.


Picturesque Port Isaac provides the beautiful backdrop for the series, with all the regular members of the cast reprising their roles.
Caroline Catz plays Doc Martin's wife, Louisa Ellingham, who resigned from her job as headmistress at the local school to pursue a new career in child counselling.
Also returning for the finale are Dame Eileen Atkins who plays Doc Martin's formidable Aunt Ruth. Ian McNeice is back to play Bert Large, with Joe Absolom as his son Al. John Marquez is PC Joe Penhale, Jessica Ransom is the doctor's receptionist Morwenna Newcross and Selina Cadell is pharmacist Mrs Tishell.
After having his medical career scrutinised by the General Medical Council because of his blood fear, Doc opted to leave as Portwenn's GP at the end of the previous series.
The Doc makes efforts to conquer his anxiety in this final series, and begins to question whether resigning was the correct option. He and Louisa have recently welcomed a newborn daughter, Mary Elizabeth, who will be a sibling to James Henry, who is four years old.
Because Louisa is pursuing her new job as a child therapist at his former practise, the Doc is left holding the infant and mending clocks on the kitchen table. But does he really want to go back to his previous job?

Martin Clunes:
"I have loved going to Cornwall to make Doc Martin over the last 18 years, and I have looked forward to returning to this beautiful county this year for the tenth and final series. The people of Cornwall, and Port Isaac in particular, have always been so helpful to us when we are making the series. We have some great story lines for the new series, and for the Christmas special, which I hope Doc Martin fans will love. I shall miss Cornwall, and all the lovely people we have worked with. But it is the right time to say farewell to the Doc, and Portwenn."
Posted by JD at 12:57