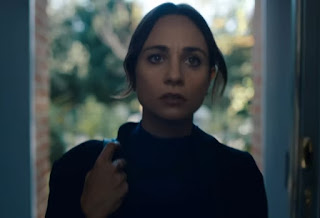 ITV have today released the official first look trailer for a brand new highly anticipated thriller Our House, coming this March to ITV.
Tuppence Middleton (Downton Abbey, Shadowplay, War and Peace) and Martin Compston (Line of Duty, The Nest, In Plain Sight) play estranged husband and wife Fi and Bram Lawson as Rupert Penry-Jones (The Drowning, Whitechapel, The Last Weekend) takes the role of enigmatic Toby.
Also part of the cast are Weruche Opia (I May Destroy You,) as Fi's best friend and neighbour Merle, and Buket Komur (Honour) as the mysterious and alluring Wendy.
The four part drama is adapted by Simon Ashdown from the international best-selling novel and produced by Red Planet Pictures.
Our House is due to air this March on ITV

Email ThisBlogThis!Share to TwitterShare to FacebookShare to Pinterest
Labels: Our House