First Look - Breeders - Premieres on 12 March on Sky One 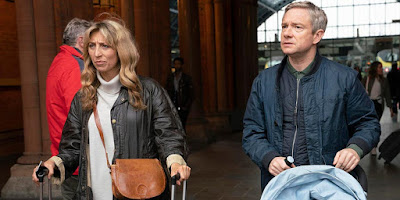 Martin Freeman and Daisy Haggard star in a new Sky original comedy, exploring the paradox that every parent knows but never admits; you would willingly die for your children, but quite often you also want to kill them. Martin Freeman stars as Paul, a caring father discovering he’s not quite the man he thought he was. His partner in this impossibly steep parental climb is Ally (Daisy Haggard), who runs a recording studio, makes Paul laugh and can read a story to their children while she's technically asleep. In this honest and uncompromising comedy Paul and Ally are juggling full-time careers, aging parents, a mortgage, upheavals in their relationship and the unenviable curveballs of parenting their young children.

Email ThisBlogThis!Share to TwitterShare to FacebookShare to Pinterest
Labels: Breeders