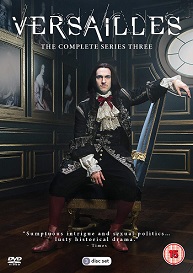 Versailles - Series 3 is out on DVD on 13th August 2018. And to celebrate we have a great competition for you and 3 copies on DVD to give away.

Synopsis
Louis has brought an end to the Affair of the Poisons and won the war against Holland. It seems that nothing will thwart his plans to expand his empire and assert his power over the whole of Europe. But his dreams come at a cost, the people have had enough of paying and trouble is brewing. At Versailles too, Louis must face new challenges.

Maintenon, his new mistress, leads him into an assertion of absolutism causing him considerable dissent in the Court. Thee King's tolerance for any kind of dissidence, be it from his people, Protestants or the Pope himself, slowly disappears; and yet a threat hangs over Louis: a mysterious prisoner whose face is hidden behind an iron mask.

Terms and conditions
1. Closing date 20-08-18
2. No alternative prize is available
3. When the competition ends as indicated on this page, any and all entries received after this point will not count and emails blacklisted due to not checking this page first.
4. Winners will be chosen randomly and will be informed via email.
Posted by JD at 08:31

Email ThisBlogThis!Share to TwitterShare to FacebookShare to Pinterest
Labels: Versailles