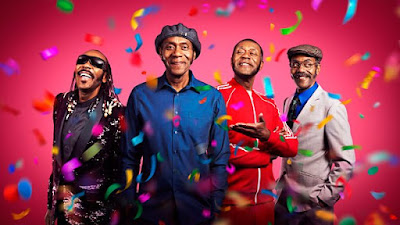 In 1975, a 16 year-old Lenny Henry bunked off school to appear on TV talent show New Faces, beginning a long and glittering career in comedy, theatre and film. In 2018 Sir Lenny is 60 - the perfect excuse to celebrate a man who has made a unique impact on British entertainment.

Hosted by Sir Trevor McDonald in front of a studio audience, the programme takes a lighthearted look back at a career that started 43 years ago and hasn’t stopped since, as well presenting some brand new sketches on a range of topical subjects.


Happy birthday Lenny! How does it feel to reach 60 and have a celebratory show about your life and career?

It’s fantastic. It’s a real honour. You never imagine you’re going to be 60 when you’re a kid. I started when I was 15 years old, so to be 60 years old and having a commemorative show is a fantastic thing. It was a joy to do and I got to be interviewed by one of my heroes, Sir Trevor McDonald, and to do some silly sketches. It was lovely.


What can you tell us about the show?

It’s a lot of me talking to Sir Trevor about things that have happened to me, my love of music, growing up in Dudley, my audition for New Faces, my relationship with my mum, and what it was like growing up in a Jamaican household and then suddenly having to integrate with a predominately white Dudley. I talk about diversity - it’s quite a wide-ranging conversation. There are a lot of funny things but there are some serious things too. I didn’t want to rely on archive, I wanted to do some stuff that was present.

I’m crazy about Marvel comics so I wanted to do Black Panther. I thought Bishop Michael Curry at the wedding was hilarious, and I’m a fan of Stormzy. I’ve met him a couple of times - he always calls me uncle - so we did him and Stevie Wonder, who I’m also a big fan of. I always did music parodies so I wanted to do that.


Can you give us a sneak preview or hints into any new additional characters that make an appearance in this celebratory show?

There are some treats! There’s lots of me reminiscing and talking to Sir Trevor McDonald. There’s a lot of laughing - there are some lovely little sketches and there’s an extended opening sequence which I can’t wait for people to see!

We’ll be going to Wakanda in the interview. We’ll be revisiting the recent royal wedding with one of the stars from that… although there’s no stand-up in the show there's a lot of me chatting about stuff. It’s more sit-down now though. I don’t charge around like I used to, especially when I can sit down and tell you stories, it’s fun.

I think there is lots to look forward to in this show - although I would say that!


Can you share with us some of your all-time favourite clips?

I remember Michael Jackson’s Thriller. It was freezing cold and we shot during the night between one and four o’clock in the morning. It was such fun - I like direct parodies, they’re great.

I remember the Prince video. We did Purple Rain and I was a huge guy trying to be Prince. It was not right to have Prince be that big. I did Barry White and Prince for Comic Relief!

And anything with Tracey Ullman. Any sketches when we were husband and wife, or boyfriend and girlfriend, she invested them with such truth and honesty you couldn’t help but rise to the occasion.


Is it easy to get back into the swing of things with classic characters?

Because the characters generally come out of me it’s quite easy to slip in and out of them. Mr Donovan is based one of my uncles so they’re all me really.

But doing Chadwick Boseman Black Panther, because they’re is a certain thing he is doing which is kind of Nelson Mandela, part new African, sort of Zulu, sort of South Africa - it’s a mixture of things.

And Bishop Michael Curry is by turns sonorous and incredible deep and then incredible excited and he starts to move his hands around a lot. He’s very dramatic! I really like silly stuff so to me they’re all aspects of me that give me chance to act the goat. I just tend to act now, so acting the goat is fun!


Do you have an all-time favourite character?

I think Deakus was a good character - he was based on the guy who used to deliver bread to our house. It was a nice higher voice. It’s very funny because when I used to do Deakus I’d be in makeup for ages and now if I was to do him they’d be like, ‘yeah you’re fine’. He was about 60 and I thought, oh he’s an old man, but now I’m 60 I don’t feel like Deakus, I feel like Len who’s relatively young still. He was always wonderful to do.


Sir Trevor McDonald is hosting your birthday special. You’ve both come a long way from when he surprised you as Trevor McDoughnut on Tiswas - how was it to reminisce with him again?

I’ve known him since he appeared as the real Trevor McDoughnut on Tiswas and he’s a friend of mine. We don’t see each other a lot but when we do meet we chat warmly about the past and what we’re doing now so he’s very good company. The only bit that was missing from the interview was a nice bottle of red wine and a bag of crisps. We really enjoy each other’s company, and he’s a great host. He makes easy transitions between subjects so it wasn’t difficult to be with him, and he laughed a lot which is lovely.


How important is it to keep reinventing characters for a new younger audience?

I think it keeps me on my toes. If you’re a comic its really easy to become complacent and think, well, I’m just going to act now and not do that stuff that I used to do, but it’s very important to know what you like. I watch The Bridge, Game Of Thrones, The Handmaids Tale. I pop in on EastEnders, Corrie, and Junior MasterChef. As a comic you need to know what you like so you can transfer that into your performance. If you’re not watching telly anymore and you’re being a bit lazy then the things don’t spring to mind.

When I was a kid it was like, well I’m going to do Michael Jackson - it was no-brainer. And you need to have that when you’re a comedian. You need to be aware of what people are watching and listening to.

Music is very important. I’ve seen most videos and I know what’s going on music-wise. There are some surprises in the show!
Posted by JD at 15:14