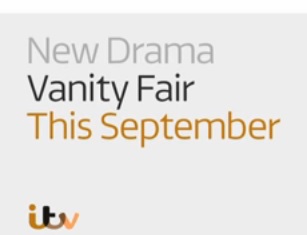 ITV commissions seven part drama Vanity Fair from Mammoth Screen, starring Olivia Cooke as Becky Sharp
“A world where everyone is striving for what is not worth having.”
A new adaptation of William Makepeace Thackeray’s, Vanity Fair, has been commissioned as a seven-part drama for ITV by the broadcaster’s Head of Drama, Polly Hill.
Written by Gwyneth Hughes (Dark Angel, The Girl, Miss Austen Regrets) and produced by leading production company Mammoth Screen, Vanity Fair is being made with Amazon Studios.
Olivia Cooke - the 23 year old Oldham-born actress and star of Steven Spielberg’s forthcoming film Ready Player One - plays Thackeray’s timeless heroine Becky Sharp.
Gwyneth Hughes’ adaptation of Thackeray’s literary classic is set against the backdrop of the Napoleonic Wars, and follows Becky Sharp as she attempts to claw her way out of poverty and scale the heights of English Society. Her story of “villainy, crime, merriment, lovemaking, jilting, laughing, cheating, fighting and dancing”, takes her all the way to the court of King George IV, via the Battle of Waterloo, breaking hearts and losing fortunes as she goes.