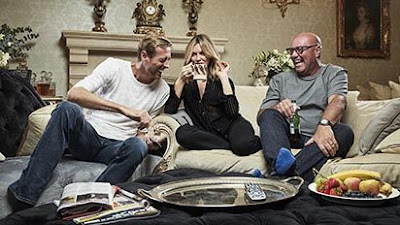 The Bafta award winning Gogglebox returns once again with a celebrity special for the fifth time. Stoke City footballer Peter Crouch will be sharing the Gogglebox sofa with his model and TV presenter wife Abbey Clancy and her father Geoff as part of Channel 4 and Cancer Research UK’s Stand Up To Cancer campaign on Friday 26th October.

This very special edition of the TV review programme will see the famous faces as they gawp and gossip at the week’s TV. Between their own cutting remarks, tears and laughter will be the views of Britain’s favourite opinionated viewers; the genuine Gogglebox households including Giles and Mary, best friends Jenny and Lee and the Siddiquis.

Abbey Clancy and Peter Crouch said, “We are such huge fans of Gogglebox so being able to take part in it together is amazing, especially when it’s for such a brilliant cause. The work being done by the Stand Up To Cancer campaign is phenomenal and we are thrilled to be able to play our part.”

Email ThisBlogThis!Share to TwitterShare to FacebookShare to Pinterest
Labels: SU2C