Interview with AJ Pritchard and Louis Smith for Celebrity Hunted 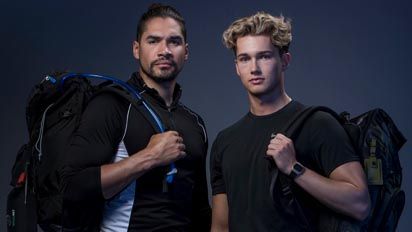 Why did you two want to go on the run and be Hunted?

Louis: It's a challenge.

AJ: It sure is. Obviously it's for a fantastic cause, but the main reason, other than that, is that it's like being big kids, it's like a giant game of hide-and-seek around the whole country with no rules. Who wouldn't want to do that?

Why did you two decide to partner up for it?

AJ: Obviously we know each other. We thought that competitive mentality, that need to win we both have is what really did it for me. That's going to help us so much.

Louis: There are a lot of people you know you wouldn't want to be stuck with in a situation like this but me and AJ have the same kind of work ethic, same background...

AJ: The same crazy brains. We think outside the box!

Talk us through your strategy...

AJ: Our main strategy for day one is not to get caught! The main things is to get out of London as quick as possible.

Louis: We don't want to be the first ones to get caught for sure.

AJ: Sprint as fast as possible to a nice car, get a car to an airfield and get out of the area. That's pretty much day one sorted in our heads. Louis doesn't like flying he told me this, so I made sure we get in a plane!

Louis: I don't like getting on the big planes let alone, little propeller planes. I'm still waiting for them to find out if they got me a parachute.

AJ: We're all laughing at him but he's been deadly serious. He's like, 'I want to have a parachute on when we get in the plane!"

Louis: I won't wear it but you feel ten times better knowing that there is a parachute on board. If your plane is going down you whack it on. You pull the string somewhere, the shoot blows out and you save your life!

Once you're out of the city are you going to rough it?

AJ: Yeah, get out of CCTV in London, get out as soon as possible and then just literally go off grid. We'll use people we don't know. We're ready to camp even though I did say to Louis, I've got the tent it's great and then he told me he's never camped before in his life!

Louis: I've never slept outside. I almost slept in a tent once then I went inside the house. The closest I've ever been to sleeping outside is that I slept in my car once. I had an argument with my first ever girlfriend. That was as closest I ever got to sleeping outside. Our plan is to use people's houses but there is the tent as a last resource. AJ was like, "We need to just be upping the stakes. Just walking through the forest staying away from people, and cameras, and stuff like that". I'm totally up for it. I've just never put myself in this situation before.

Obviously we know how competitive you two are. Do you think that's going to really kick in when you head out?

AJ: It's at the forefront of our brain, to win is everything. Obviously, when we are on the run the adrenaline kicks in, it is real, so your heart just beats so much faster!

How does this stress of being on the run compare with stepping out on the Strictly dance floor?

Louis: It's too easy!

AJ: For me this is chill out time, this is relaxing, a social retreat. You will go into this for the challenge. So it is that challenge of, A, the first four days getting into the swing of it and B, when it comes to that final point, trying to get to the extraction site without being caught.

Louis: The mind games will go through the roof! I could be so paranoid and I've never been paranoid about anything in my life before. This will the first time!

AJ: Especially the first day getting out of London, every camera you look at, every person you look at, you should be thinking, "Are they going to dob you in or say something?" The funny thing is when we were filming some pre run scenes with a helicopter above us, even just hearing the helicopter it suddenly made your heart beat faster. You start to sweat just thinking, "Well if that's there, how would you actually get away from it? It would be impossible.

Louis: I live in Peterborough and you sometimes see the police helicopter out with the searchlight. It is a nice feeling knowing that it's up there but it's not after you but this time it's going to be a bit different!

Have you got any or plan to call on a celeb house during the run?

AJ: I think we've got friends in different locations, the problem is most of them live in London, so that's a complete life we want to stay away from. The thing is you never know what's going to happen, it depends where we are.

Louis: I want to try and use as many of my friends as decoys, as I can.

Will you use the general public to help you?

AJ: I think we are going to rely on their generosity. The good thing is that we're mostly known for Strictly and that audience is older, they're the ones that want to bring you in, "Have a cup of tea, have some cake". Sounds like a dream! That's what we're going to go for.

Maybe you could trade a place to sleep for some Strictly dance training?

AJ: Yeah! It'll be a case of, "I'll teach you a dance move, we can do that and maybe get you a ticket to Strictly if you've really helped me a lot here!" It's not really bribery, is it? But if it helps us win this, then than competitive streak will show.

Which pair do you think is your biggest rival?

Louis: I honestly don't look at it like that. I honestly feel it's us against the Hunters. If we saw another team then I would never dob them in to the Hunters. Don't get me wrong, if there was one team to make it, I'd like it to be us.

AJ: I think probably Vicky's the best suited for this. She's the one that's roughed it and done challenges. I think she'll get on very well.

AJ: They seem to want to drink their way through it, sometimes it's the best way in an unfamiliar scenario situation, Dutch courage and all that!

Once you are on the run the Hunters will grill your family. How do you think they're going to stand up to being interrogated by them?

Louis: My mum can say what she wants to say because I've told her nothing! I don't trust my mom. I've watched the programme, I did my research, and the Hunters are manipulative. They'll say, "Look, Louis is in danger, we need to find them" My mum is such a sucker, she's a worrier, so she'll be like, "My god yes he's at this place, please look after him, bring him back safely". So I've given her nothing!

AJ: I'm pretty much in the same boat. Mum and Dad don't really know much so they can't really give anything away.

Have you set any traps for the Hunters?

Louis: We've done one or two but we haven't decided if we're going to use them yet. I've got a secret text message code. I know what to say to my friends, what words I'll use, the secret fake text or real text so if I need him to go somewhere.

How are you feeling about losing social media and all your creature comforts?

Louis: It'll be refreshing to be honest. You've got your phone and you think, "I can't live without it," but then your battery runs out and you can't use it even if you wanted to and it is just so peaceful. I mean that's what it's going to be like, I'm looking forward to it.

AJ: It'll be nice and easy. It's nice to have only one focus for two weeks, there is only one thing - do not get caught!

How do you feel about the Hunters?

Louis: They are ruthless. I was watching the programme while I was doing my research, they are relentless. We've been doing our research on what gets people caught, things for us to avoid.

AJ: They are savage. The shit that they have come up with to try and manipulate the public, like say lies! There was an episode of dad and his autistic son. He got a lift with this woman and then the Hunter said to the woman, "He doesn't even have a son, he is just lying". That's so bad!

Finally, what is your message to the Hunters as you prepare to run?

Louis: Our message is just wait to be surprised.

AJ: My message would be feel free to investigate the others before us!
Posted by JD at 14:48