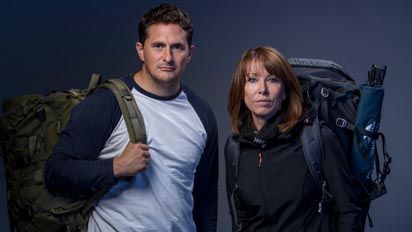 Why did you two want to do this show?

Kay: I'm doing it because I have a very strong connection with several cancer charities, and I always try and raise their profile if I possibly can. I think it's not just about raising money, I think it's about raising the profile of the charity as well. So when I was approached to do Hunted I was delighted. I approached Johnny and said, "Please will you come with me?" He's brilliant, he's talented, he was a former commando so I know he's going to look after me and hopefully we'll have a lot of fun along the way as well.

You’ve spoken in the past about your own cancer scare so it must be an issue close to your heart?

Kay: Since I was first approached to do this show three of my very closest girlfriends have all died from brain tumours, it's a bloody wretched disease. My girlfriends were in their fifties and sixties and each one of them has suddenly died of a brain tumour, either as a result of breast cancer or secondary cancer. Actually, one of them died very quickly, so I'll be thinking about them a lot as we walk towards the finish line.

What would they think of you doing this?

Kay: I can hear them all saying to me, you know, “you’re a daft bat, but thank you!”

Obviously, given your background, your military background, this must be a walk in the park?

Johnny: Well, this is a bit of a mess because my skill in the military was coordinating aircraft to drop bombs and, fortunately no-one lets you do that in London anymore, so I'm not sure what skills I bring, but I will certainly try and keep Kay's spirits up and, look you know, she's a great woman and I think we'll keep each other going and we will hopefully be successful and raise as much money as we can for Stand Up To Cancer.

You both must be so well connected, so what is the strategy?

Kay: Well our strategy is to go on the run, to have some fun, to try and evade the Hunters and to use our network as best we can. We've got quite a strong network between us, and we may use some of them, we may use all of them, we may use none of them, but we're safe in the knowledge that they're there if we need them.

Johnny: There's an element of planning in there, but I think also we're just going to use Kay's brilliant capability to speak to people randomly in the street and ask for stuff! I think that's going to come in really, really handy actually, and so I'm looking forward to hanging on her coat tails on occasion. I'm slightly more shy in that regard, although now I have to talk to people about weird stuff like politics, so maybe I should be better at it, but I'm hoping that she'll lead the way.

Kay: He's hiding his light under a bushel. It's not true at all. You know, we spent quite a lot of time together over the last few weeks, getting to know each other a little bit better ahead of going on the run and sleeping in a tent. So you know, he's very personable, he's very easy going and he's quite easy on the eye, so I think he'll be all right.

How are you feeling about the Hunters?

Kay: Johnny's very rude about them!

Johnny: Well they're just TV props, essentially, aren't they? So, no I'm not bothered about them at all. I think we're going to have a lovely two weeks on the run, catch a bit of sun, chill out and raise a lot of money for charity.

Kay: I am hoping that they don't hear what he said until after we've finished!

Johnny: Probably, but that's fine, they can try as hard as they like. Could be interesting.

Kay: We have a bit of a challenge to start with because Johnny has some commitments which mean that, you know, he needs to do his day job and so that's going to be a bit of a challenge getting in and out of parliament, but we've got a strategy and we're hopeful that it will stand us in good stead.

How are you planning to get into parliament to vote?

Johnny: Well luckily the Hunters are so bad that I can just waltz my way back into London, do my job and waltz back out, so I don't really see it as being particularly difficult! I think it's going to be harder, you know, as we get further around the country. It's going to be good fun.

It’s a crazy time in world news and politics, as two people embedded in both areas how are feeling about taking yourself out of that?

Kay: It's going to be so hard, actually, because the first thing I do in the morning is check my phone and check Twitter and, you know, check the internet to see what's happening news wise. There’s never been a better time as far as politics is concerned, and the first election I covered was in 1979 when Margaret Thatcher won, so it's an incredible time to be covering politics. So yes, I'm going to miss that, but I want to do my bit for charity and I want to just decompress, reset and be ready for the challenge.

Are you looking forward to almost going back to basics, forgetting about work and all the pressures that come with that?

Johnny: I'm really looking forward to it. It's been such a tumultuous time, I think, and it's such an extraordinarily busy job, and you are dictated to by events outside of your control so It's going to be nice to have a bit of time away from that.

Dom Joly has been joking that if the government falls while you're away that you could be the designated survivor and end up Prime Minister!

Johnny: As in I'll be the only one left? Yes! I think that's the only way I'd ever get anywhere, unfortunately!

Kay: I think if it was at the beginning of the year it might be a very different story, but we're limping towards recess. It's going to be fun.

Are you worried you might have a blazing row and split up?

Kay: No, we won't split up. I think we are both quite volatile, on occasion, but I think we're quite solid as well, and I think if we need to stomp around the field and then come back again, we will, and then we'll come back and have a good laugh and continue onwards.

Do you have a plan or strategy?

Some of the others have got disguises to help them, have you?

Johnny: No, I'm pretty sure no-one will recognise us, well, certainly not me!

Kay: Well I'm hoping that they do recognise us and then hopefully help us!

This series always throws up the conversation around our CCTV culture and whether it’s too intrusive, what do you think?

Johnny: I haven't got a problem with CCTV culture I've always thought there's nothing wrong with it. I understand, yes, people have privacy concerns and so on, but with our generation growing up the way we are now, I think, it's just one of those factors at play within the lives we lead. Generally speaking, when I go out and speak to people they understand that we're doing nothing wrong, and it's there to look after people.

Kay: I completely agree. I mean, I haven't had a problem with CCTV culture especially you know, in the age that we're living at the moment. The concerns about terrorism, it’s a necessity. But for the purposes of this program, I wish all the cameras would go dark for a couple of weeks!

The Hunters will grill your loved ones about you, will they be able to withstand all that?

Kay: My loved ones are generally in the profession, so they will be charming and they'll make them a cup of tea and they will give absolutely diddly squat away!

Johnny: My wife appears very jovial, et cetera, but she knows what she's doing, and she won't give anything away either!

Have you set any like red herrings, any traps for them?

How competitive are you two when you look at the other teams on the run?

Kay: Oh we're not competitive at all, are we Johnny?!

Johnny: No, I'm pretty relaxed about going out on the first day, actually! Of course we're competitive. But the Hunters seem desperate to get us first so I don't think we're going to win.

Kay: We have spoken about what happens at the extraction point if one of us falls and whether we'll wait for the other one. I suggested I would wait and he said would climb over me to get there!

Throw one of you at the Hunters while the other gets to the extraction point?

Kay: Don't give him any ideas

Johnny: Like bait, I’ll feed her to the sharks!

Who do you think is your biggest rival to getting to the end?

Kay: We've got on really well with everybody, actually, so we don't think that anybody's a rival. We'd be delighted if we see everybody again at the extraction point.

Johnny: AJ and Louis are clearly strong, but we want to see everyone again.

You mentioned earlier about the general public. Do you think they'll be a help or a hindrance?

Johnny: They'll be a help to Kay but once they find out that I'm a member of parliament, I think they'll be falling over themselves to phone us in!

Kay: I think they would be very much a help, unless they are Peter Andre fans, if they are then I'm screwed!

Johnny: She made him cry!

Finally, what is your message to the hunters?

Kay: Catch us if you can!