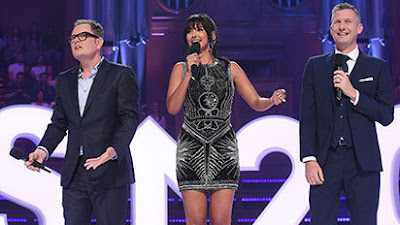 On Friday 26th October stars from across the worlds of entertainment, music and sport came together for RTS award-winning and BAFTA nominated Stand Up To Cancer, the joint national fundraising campaign from Channel 4 and Cancer Research UK.

Alan Carr, Maya Jama and Adam Hills were at the helm of the spectacular, star-studded live TV fundraiser and announced a grand total of £24.6 million for research into cancer which will accelerate new cancer treatments to UK patients and save more lives.

The live extravaganza, a culmination of inspirational programming and epic fundraising activities, was heaving at the seams with celebrity sketches, comedy skits, interviews and moving moments, all banging that Stand Up To Cancer drum.

Music superstar John Legend led the cast of ‘Big Star, Small Print’ showing us quite how easy it is to donate with a brilliant new version of his smash hit All of Me with Rick Astley and Zara Larsson following suit. Popstrels Little Mix and 90s heroes Backstreet Boys were our superstar superteases leading us through the events of the evening, Sharon Horgan and a host of stars including Emma Willis, Katherine Ryan, Prue Leith and Clare Balding were on hand to highlight the importance of knowing your boobs and recognising signs of cancer and Kate Beckinsale showed us why going for a smear test can save your life.

There was an incredibly moving moment as Emeli Sandé paid tribute to soul legend Aretha Franklin who died from cancer in August with a stunning version of Don’t Play That Song and Gary Lineker and Mark Gatiss talked very movingly about their personal experiences with cancer.

Joining Alan, Maya and Adam for Stand Up To Cancer live in the studio were Liam Gallagher, John Bishop, Nick Grimshaw and Mo Gilligan and there were very special music performances from Tom Odell, Tom Walker and Freya Ridings. Plus Chris O’Dowd and Katherine Ryan were in the studio all night to explain the incredible science funded by Stand Up To Cancer.

Ed Havard, Head of Entertainment at Channel 4 said, "This has been the most successful Stand Up To Cancer campaign to date and we continue to be blown away by the public’s generosity. We’re incredibly grateful to every single person who donated and to the huge array of famous faces who gave up their time to be a part of the campaign. From all of us at 4, a massive thank you”

Clare Moore, Director of Stand Up To Cancer at Cancer Research UK, said, “There’s been amazing progress in research. Thanks to new treatments, screening and prevention, more people are now surviving cancer. But 1 in 2 people will be diagnosed with the disease at some point in their lives, that’s one person every 2 minutes, so we still have a lot more work to do. And funding research is key.

On behalf of Cancer Research UK, I’d like to say a massive thank you to everyone who shared their experience of cancer, fundraised or donated to help us reach this incredible total. Because of you, we can fund more research and save more lives.”

#standuptocancer trended all night on 26th October on Twitter.