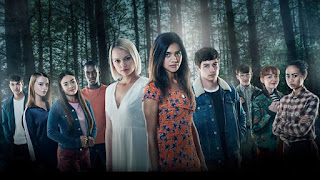 Mia (Lisa Ambalavanar)
The quintessential Mean Girl, she's gorgeous - and oh does she know it - but it's her confidence that makes her attractive. She's achieved a blend of charm, swagger and flattery laced with domination that means every girl wants to be her and every guy wants to date her.

Lisa Ambalavanar says: "I absolutely loved getting to tell such a thrilling, well-written story and playing a strong female lead in a series that is packed full of inspiring role models. The cast is very diverse and representative of today's youth but without stereotyping, and that is so important. The whole cast is just amazing and it was a pleasure to be around them, learning from them every day. I don't think there's been a show quite like this for young people in the UK before and that's very exciting!"

Amber (Ellie Duckles)
Underneath her Disney Princess exterior is a psychological predator, capable of ripping your self-esteem to shreds with an innocent sounding comment. And yet despite her deadly nature there's something fragile about her, an ethereal grace that draws you in.

Ellie Duckles says: "Playing Amber was a challenge but an exciting one.  Her supernatural powers and manipulative game plan were thrilling. I wouldn't have expected to enjoy playing the villain as much as I did!"

Dev (Jacob Dudman)
Good looking, charming and easy going in the way that only people who've had it relatively easy can ever be. Dev thinks of himself as something of a 'white knight'. He has always been the hero but he's never before come up against the combined forces of girls like Amber and Mia.

Jacob Dudman says: "At first glance, The A List may look like a 'teen drama', but people who watch the show will see that it's got a foot in every genre - horror, romcom, sci-fi - the works. It's a show made with love for all audiences. We hope you enjoy it as much as we enjoyed making it."

Alex (Rosie Dwyer)
The lone wolf wrapped in sarcasm and acerbic one-liners, although her bark is worse than her bite. Ever the pragmatist, she has very little patience for anything frivolous or vapid. She also completely rejects any heteronormative expectations.

Kayleigh (Savannah Baker)
Sweet, and slightly vapid, she's a Beta by both design and by preference. She'd have no idea what to do with the spotlight if she ever got it and so prefers to blossom under the guiding light of others.

Brendan (Micheal Ward)
The dominant half of the Zac and Brendan double act, he's the brawn rather than the brains. Despite his considerable bravado, his body (which he takes meticulous care of) may look good but his emotional intelligence still leaves something to be desired.

Zac (Jack Kane)
Smaller in stature but bigger in heart, Zac is more sensitive than Brendan. When they were younger that meant that Brendan always had the upper hand and he never questioned that but now that he's older he's just on the cusp of realising that maybe this isn't always a good thing.

Harry (Benjamin Nugent)
A childhood illness left him with lingering health (and general) anxiety issues, an encyclopedic general knowledge gained through reading whilst in quarantine and underdeveloped social skills. He's academically intelligent but he's all theory and no practice, he's never really been out in the world and so it all seems quite scary to him.

Jenna  (Eleanor Bennett)
A supporting character who fancies herself as the leading lady. She comes from a theatre background so she's used to always having the spotlight, which she loves, more for the attention than the artistic integrity although she would never admit it!

Petal (Georgina Sadler)
A dreamer and an optimist; she believes in everyone and everything. Raised in the country by an unconventional but loving family she radiates positivity and light.

Mags (Nneka Okoye)
A well-meaning Mother Hen who just wants everyone at the camp to get along. There's more to her than meets the eye though and over the course of the series we'll discover that beneath her cheery façade lies a dark secret.

Dave (Cian Barry)
Cheery and sincere, Dave is a complete dorky dad-in-waiting with terrible jokes and an enthusiasm for the outdoors.