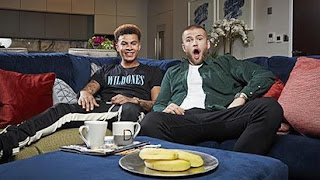 The Bafta award winning Gogglebox returns once again with a celebrity special for the fifth time. England and Tottenham Hotspur's Dele Alli will be sharing the Gogglebox sofa with his fellow England and Spurs teammate Eric Dier as part of Channel 4 and Cancer Research's Stand Up To Cancer campaign on Friday 26th October.

Dele Alli said, "Eric and I were really pleased to be asked to join the Gogglebox families. We wanted to lend our support and help raise awareness for the great work of Stand Up to Cancer."

Eric Dier added, "The work carried out by the Stand Up To Cancer campaign is amazing and Dele and I are really pleased to be able to play our part. We love Gogglebox so it's going to be quite surreal to see us on the show."

Launched in the UK in 2012, the joint national fundraising campaign from Cancer Research UK and Channel 4 raises funds for translational research, accelerating new cancer treatments and tests to UK patients to save more lives, more quickly. More than £38 million has been raised in the UK to date, funding 35 trials and projects involving more than 8000 cancer patients, and supporting one international Dream Team.