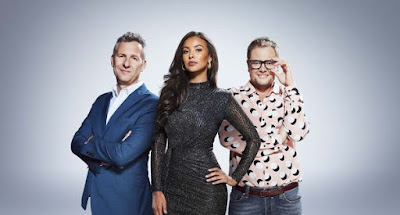 RTS award-winning and BAFTA nominated Stand Up To Cancer is back this Autumn, bigger and better than ever before. Stars from across the worlds of entertainment, music and sport will come together and send themselves up, doing their bit in the fight against cancer.

With Alan Carr, Maya Jama and Adam Hills at the helm of the live extravaganza on Friday 26th October, the show will be jam packed with famous faces, star studded sketches and tear-jerking moments, all banging that Stand Up To Cancer drum.

Channel 4 will unleash a line-up of celebrity packed programming in the run up to the live show and this Autumn, key Channel 4 shows will get a Stand Up To Cancer makeover from Celebrity Gogglebox and Celebrity First Dates to the return of the BAFTA nominated Celebrity Hunted and brand new for this year, Celebrity Call Centre.

Launched in the UK in 2012, the joint national fundraising campaign from Cancer Research UK and Channel 4 raises funds for translational research, accelerating new cancer treatments and tests to UK patients to save more lives, more quickly. More than £38million has been raised in the UK to date and 35 trials and projects have been funded, with around 8,000 cancer patients either participating, or due to participate.

How to get involved:

You can donate at channel4.com/su2c (opens in a new window) or sign up to fundraise at standuptocancer.org.uk
100% of your donation goes to Cancer Research UK in support of the Stand Up To Cancer campaign.

Celebrity Gogglebox
A firm favourite of Stand Up To Cancer, the Gogglebox Celebrity special will once again return. Some very famous faces join Britain’s favourite opinionated viewers for a very special edition of the TV review programme as they pass judgement on a vast array of TV goodness.

Celebrity First Dates
Lady C and Joey Essex are among the celebrity line-up taking part in the BAFTA winning First Dates which is returning for a Stand Up To Cancer Special. Fred and his team of Cupids have rolled out the red carpet for the stars who have been meticulously matched in a bid to end their search for a soulmate. In a host of intriguing dates the celebrities reveal a side of themselves we’ve never seen before, but will all their stars align or will their fame turn out to be their misfortune?

Celebrity Call Centre for Stand Up To Cancer
Welcome to a call centre like no other - staffed entirely by celebrities, it’s a helpline for the nation, where a team of all-star agony aunts and uncles will take calls from the great British public on the issues troubling them. Kimberley Walsh, Georgia Toffolo, Mo Gilligan, Joel Dommett, Kim Woodburn, Louie Spence, Rachel Riley and Tyger Drew-Honey will be manning the phone lines, advising on everything from how to get through a break-up, to extra-marital affairs, and the perils of online dating. In the process, they’ll open up about their own life experiences, and the challenges and heartache they’ve faced, as they take on dilemmas large and small, with no topic off limits!


Channel 4’s Head of Entertainment Ed Havard said: “Stand Up to Cancer has grown into the most ambitious TV event on Channel 4, raising many millions of pounds to fund groundbreaking cancer trials. We are hugely grateful to all the stars involved in this campaign, and of course to the public who have donated so generously."
Posted by JD at 13:14

Email ThisBlogThis!Share to TwitterShare to FacebookShare to Pinterest
Labels: Stand Up To Cancer