Interview with Maya Jama for Stand Up To Cancer 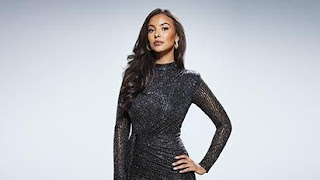 You're going to be presenting Stand Up To Cancer on Channel 4. How are you feeling about taking the helm on such a massive show?

I'm so excited – it literally doesn't feel real that they've asked me to do it. I can't believe it. It's such a massive deal and such an incredible cause. It's something really close to me as my Nan had breast cancer and I know how important this campaign is to so many people. I'm really ready and really excited; I just hope I can do it justice.

What will you do in the way of preparation?

I'll be watching the previous shows to get an idea of how things flow – I haven't really done anything on this scale before! But I work pretty much every day, so I get a lot of presenting practise in.

Do you like doing live TV, or do you prefer the safety net of pre-recording?

I actually prefer live TV a lot more as you get the adrenaline from it, you're in the moment, it's all guns blazing and you just go for it. It gives off an energy you just don't get from pre-records. Being able to see the crowd's reaction and doing things in that moment is just so much better so live is definitely my favourite!

What can you tell us about what's in store on the night itself?

There will be some great celebrity specials – really good celebrity guests, some amazing musical performances including Tom Walker, Freya Ridings and Labrinth which will be incredible as his voice is insane. Of course there's Celebrity Gogglebox and loads of different sketches from people you'll know and love. There's plenty to keep you entertained throughout the evening.

Have you seen much of the previous shows?

Yes, I watched the last live show (in 2016) and last year's Celebrity Gogglebox with Big Narstie and Ed Sheeran was hilarious. Davina is one of my favourite people in the world and someone I really look up to. I've watched her a few times on previous shows and just been like 'she's so amazing.' It's definitely a pinch me moment. We've never met and I really want to meet her! I've spoken about her so much that she probably thinks I'm a bit of a weirdo fan.

Are you looking forward to working with Adam and Alan?

Yes! Alan is another absolute hero. We were at the photoshoot together and he's so hilarious and amazing at what he does. I've met Adam before when I was a guest on The Last Leg and he's obviously a top G. I'm really looking forward to working with both of them.

Have they given you any advice?

Alan was like, 'It'll be fine babe. We have loads of rehearsals, it's very emotional but you've got all of us with you together.'

Do you get nervous before live shows?

I think naturally if it is something I haven't done before then yes I do but then it gets a mix between the adrenaline taking over and you just feeling like 'okay, just go!' and you're moving like Sonic at 100 miles an hour.

How will you cope with the emotional side of things – the films and personal testimonies?

I feel like whenever you watch it, you do naturally get sad because they are real stories and often heart-breaking to watch. If I do end up crying, then I'll just have to roll with it.

How has cancer affected your life?

My Nan had breast cancer and that was the closest immediate member of my family affected in my life so far. My mum's uncle also passed away from cancer so it's something that's been in our family and something that's affected us. It's ridiculously common and I'm super passionate about getting one step closer to ending it forever.

There are so many important and worthy causes out there – why should people give to Stand Up To Cancer?

1 in 2 people will develop cancer in their lifetime – it's so common. We're all going to be affected by it, whether it's directly or someone we know and we can put a stop to it. So I feel like raising money for the Stand Up To Cancer campaign to help end it is something we should all support.