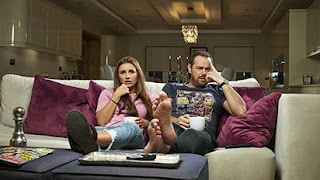 The Bafta award winning Gogglebox returns once again with a celebrity special for the fifth time. EastEnders actor Danny Dyer will be sharing the Gogglebox sofa with his daughter, Love Island winner Dani Dyer as part of Channel 4's Stand Up To Cancer campaign on Friday 26th October.

Danny Dyer said, "Dani and I had such a laugh filming Gogglebox and hope we can raise bucket loads of money for Stand Up To Cancer as it's such a wonderful cause. Cancer is affecting too many of us and we need to pull together and put a stop to it."

Dani Dyer added, "I absolutely love Gogglebox and couldn't be more excited to be on it with my dad. I'm just hoping we don't have to watch any of the antiques programmes he's always watching... but I guess as it's for Stand Up To Cancer, which is such an amazing cause, I can let it slide!"