The First: Interview with Natascha McElhone who plays Laz 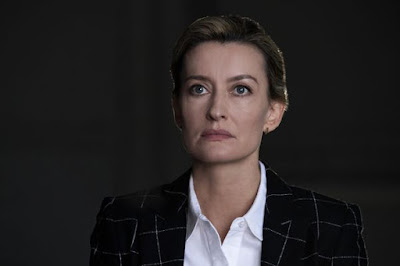 Explain a little bit about The First.

One of the things that Beau was aiming for was this idea of human ambition. We even have it in our vernacular – “it’s not rocket science, it’s not like going to the moon…” It’s no accident he used that… not in an allegorical way because it is literally what we’re all questing to do. It’s about how robust human relationships are, the contracts we make, the understandings between families and what we hear and don’t hear. At the critical moment when these people are leaving Earth, those things are under a microscope in a way they might not be in normal life when you’re not shoved up against the wall. It’s as much a map of the human heart as the space between Earth and Mars.

She is still undergoing construction ongoing fermentation! People don’t normally have the bandwidth, time or money for that, but Beau is very much into character excavation and talking about all the possible variants, even writing scenes that we perhaps don’t use but somehow deepen our understanding of who these people are. It’s such a luxury to have that kind of process.


Laz is a hugely successful and intelligent individual, but is it fair to say she struggles with the interpersonal side of things?

Yes Laz is someone who is very unapologetic. She’s the opposite of a ‘people pleaser’. I think she’s probably had advice on how to curtail her direct approach but she isn’t interested in behaviour or impressions enough to change it, she is expedient. It’s served her well in terms of what she wants to get done. She’s not impatient; she’s just someone who cannot understand why people don’t see what she sees and why they don’t share her sense of urgency. She’s very, very decisive. I think she’s very secure and pragmatic in her decision making and solution finding, that’s something that comes very easily to her. Life has taught her she should be in the driving seat. I don’t think it’s complicated interpersonal relationship dynamics with humans that she worries about it’s why the MAV is not communicating!


Why do you think the creators decided to make her a Brit? Is that relevant to her character?

I wonder if for Americans British people get away with being more direct because they’re deemed to be courteous and civilised. I also think Beau has cast very different characters throughout because he wanted as many different perspectives as he could get. It was partly just trying to gain another perspective and show ambition, in a very obvious physical way. If you come to the States to study specifically or to get a contract with NASA, that in and of itself takes quite a lot of ambition. I was just delighted I didn’t have to work in an American accent. My dad is from Lancashire, so I took that. Her Northern accent has almost eroded. She’s been in USA for twenty years. I liked doing a hybrid accent as that’s what I hear most around me in real life.


What was it that drew you to the show?

The script has a lot to do with it. It was a joy, for sure. Whether I feel it’s something that hasn’t been fully explored or… sometimes you can read a script that feels a bit hackneyed, the buttons are all in the right places and you think, “Oh here we go, I am being pulled and triggered,” and that’s fine but it gets repetitive. The themes Beau wanted to explore in human nature really appealed to me, irrespective of the ‘space forum’ that was a bonus; it’s not a world that I’ve ever had a chance to fully look into before. I did a film once set in space but it was very much the George Clooney character who was the astronaut. I was a figment of his imagination for most of it. I didn’t do scientific kind of research for that project so this was a first. And also playing an entrepreneur, I haven’t done that before. Plus it was fun to play someone who isn’t in a romantic relationship! I liked playing a zealot. I played a nun once who had a vision and was incredibly articulate about her belief system. It was interesting to play someone who has a lot of that but it’s internalised and it’s not very expressed.


I understand you had a 7 and a half hour meeting with Beau. What did you talk about?

We had to stop because he had a plane to catch, but we could have gone on for a few more days. He’s very inspiring. He’s the real deal.


You’ve alluded to doing research to this; what kind of research did you do?

I did read quite a few books and watch Particle Fever and other documentaries. I met an engineer, an entrepreneur and futurist Sophie Hackford was hugely helpful. Also a few people who were involved in start-ups which are now up and running and successful, but equally I wanted to meet a few people whose ideas were nascent, Sophie was very informative around that what is brewing now that may be manifest in 13 years’ time etc. . Our series is set in the near future, so I wanted to talk to someone who was mid-twenties now, who maybe has a prototype, is shopping it around and is hoping to break through make it big soon…that was what I was interested in, the kernel of Laz’s ambition. One of the things that I would hear in a lot of in these people’s conversation was that they didn’t really mind if something was unpopular because they wouldn’t have gotten to where they were if they’d bothered by that. That usually denotes a certain kind of a character and also a certain kind of social behaviour. Laz is just looking for improvements all the time and that can make you unpopular. She doesn’t mind a bit of unpopularity. It’s a race against time. She’s used to most things being against her, that’s normal.


There’s some pretty technical scientific discussions in the script. When you’re doing dialogue like that do you feel you need to understand the science?

I do like to. The astronaut Chris Hadfield, who advised on the show, was really, really helpful. I’d read his book and done a bit of research on him anyway and watched his show on TV. He was a great resource. And another guy called Nicholas Patrick, a British astronaut who worked for NASA. He was great, just answering my dumb questions. I’d WhatsApp him when he was fixing some part of an engine in a desert somewhere! He was really helpful. You want to break it down in order to be able to explain it to another character. That was very important to all of us.


Going into this, did you have a particular interest in the cosmos? Has this peaked your interest?

If I wasn’t an actor I’d have a pathology of being not a finisher, someone who loves the start of an idea but rarely seeing them through to their end. Because I’m an actor and I’m meant to abandon projects when I’ve done my bit it works quite well. It was very true of this project. I became obsessed, I watched nothing but space films or documentaries or Mars society podcasts And the moment the project was over I’m thrust back into my world, kid’s stories & their needs, homework, ratios, Northanger Abbey, river flow and the PH of urine! Doctor’s appointments, birthday parties & School plays and trumpet lessons. It sounds very fickle but necessarily so. If it comes back round I’ll pick up where I left off. Work feels like a luxury because it’s part time so it never gets repetitive.


How was it working with Sean Penn?

I just loved it. From the beginning I was delighted by his generosity and desire for collaboration. It’s unsurprising because he’s directed to great acclaim; he spots what needs to be done. He also knows when to step back and let the director or writer or showrunner take control. He’s very good at immersing himself in the job he needs to do. He’s great to work with. It’s so natural, effortless for him you don’t see the stitching. It’s very easy for him. Everyone felt the same, it was pretty unanimous


The show is set in the near future and the tech is just a bit more advanced than what we have at the moment. Do you think it was a conscious decision to go down that route, rather than super sci-fi?

For my taste, because the sci-fi world has been well covered and explored, I like this. I like this achievable future that’s in our midst. In the same way we look back 15 years ago, we wouldn’t have been aware of some of the advances, yet we could imagine it. It feels like the tech and the machinery of the piece doesn’t overwhelm the people and the characters.


Bearing in mind it’s not that far into the future, did you get an idea of where we are on the road to this being a scientific reality? Are we going to colonise Mars?

For the rest of the public, if you listen to a compelling speech by someone from the Mars Society, you think “Cool! If they say it’s possible, it probably is. If they’ve invested all these billions and private individuals are willing to put money into this when they could put their money into anything, it must be.” Then when you start to break it down you see the amount of work that needs to take place. The fact that we can’t breathe, there’s no water… it’s so colossal. Then again throughout history we’ve done seemingly impossible things. There’s no reason why we won’t get to it. But by no means do I think it’s the next step. How does international law operate? Who gets to decide? We have an International Space Station for a reason but this is only relatively recently. Our international relations have reflected our space explorations to date.


Do you think Laz would have liked to have made the trip herself?

No, I don’t think so. You don’t just go – the first manned mission to Mars is clearly going to be with astronauts who are highly trained and have taken years to gather the expertise they’ve gathered. That’s not what she’s doing; she’s doing something very different. She’s probably very good at compartmentalising knows what her skill sets are, she’s not a larger than life character, a fantasy of an all-powerful CEO. I like the fact that she’s not particularly articulate or excessively magnetic or any of the things we’d normally associate these characters with.


For a lot of kids, becoming an astronaut is a dream. Is it one you ever had?

No. If anything I would dive to the bottom of the ocean before I would go into space. I’m really fascinated with the underwater world.

Email ThisBlogThis!Share to TwitterShare to FacebookShare to Pinterest
Labels: The First