The First: Interview with Beau Willimon 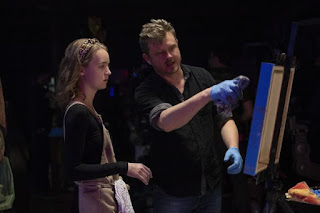 Explain a little bit about The First.

The First is about the first human mission to Mars in the early 2030s which will be the greatest pioneering achievement in human history. But on a deeper level it's about journeys, not just to other planets but inward journeys: journeys to confront one's demons, to confront the past; journeys to find ways to move forwards. We're really telling the human story of this mission and humans are messy, complicated, flawed people. We don't shy away from that. That's the subject of our show - how these ordinary people are able to confront all the various things in their lives that pose as obstacles to getting to the fourth planet from the Sun. These ordinary people are able to accomplish extraordinary things.

Why this idea? Where did the inspiration come from?

It's always difficult to pinpoint a moment of inspiration for any project. In this case I actually do have one. I've always been interested in science, technology, and in stories of exploration and adventure, stories of people pushing themselves to the limit. For me this story was a song, and the song was In Love and In Justice by Colin Stetson who scores the soundtrack for the show. I was driving in the car and that song came on. It's simply one man with one instrument, a baritone saxophone, but he makes it sound as though it's five instruments. There's a deep base from circular breathing, he's getting microtones out of the instrument using the valves, he has a microphone taped to his throat to capture vocalisations in his larynx… it feels like this otherworldly type of music but also like the sound that comes straight out of the centre of the earth. I had the volume up loud, the car was actually vibrating with the bass, and the image came to me of a dust devil making its way across the surface of Mars, which is actually the first image of the show. From there I began to think about the story getting from my car driving here on Earth to the surface of Mars. I told my producing partner when we began working on this that if we didn't get Colin to score the story I didn't think it was worth doing! For real! I really didn't want to make this show if Colin wasn't making the music. Luckily for us he was excited by the idea.

What did you do in the way of research? Do you do a lot of reading, is there a lot of talking to experts…

Both. It's almost impossible to read every book on the subject. There are books and articles coming out all the time. But I try to read and continue to read as much as possible. Every one of our team is constantly reading. But there's no substitute for talking to experts, the people that do this in real life. So we worked with a lot of folks from NASA, astronauts, scientists, engineers, a whole range of consultants, the current lead on the Mars 2020 mission… a couple of astronauts in particular: Chris Hadfield, Michael Lopez Alegria, Chris Ferguson, all have been invaluable in this process. And also Amy Webb, who is a futurist consultant, which is a whole industry in and of itself of people trying to make very informed speculations into where science, technology and culture is moving in the near future. She really helped us envision our 2030.

How much of the science behind the story do you think you need to understand in order to do your job?

It's kind of an impossible question to answer. We're exhaustive in terms of our research. I don't have a PhD in astrophysics, I don't have various masters in engineering. I will never have as a writer the expertise the experts have. What you have to do is have enough of a working knowledge that goes a bit beyond pure layman's knowledge in order to be able to envision the world. Then you break story and write scripts and run them through gauntlets of consultants to help correct what you've done wrong or make suggestions of things that could be improved.

A lot of the show is about the sacrificies made by the astronauts and their families and the toll that takes. Did you get a sense of that from the people you spoke to?

Sure. One of the things we always asked was, anecdotally, what were their own experiences, their human experiences, working in this field. In the first episode there's a major catastrophe. A lot of people we spoke to had worked for NASA during the Columbia and Challenger tragedies and were able to talk to us about what the atmosphere was like, how it felt, how devastating it was, how much determination it took to get going again. It just reinforces in the most profound and visceral way how dangerous this all is and that there is no real exploration without the potential for harm or death. That's really at the root of everything. All these thousands of people are working so hard to keep human beings alive. But aside from those ultimate costs, there's a lot of other costs too; how much time these people are away from their families, how much their families worry about them… they're all dealing with the same things you and I are. People are getting divorces, people are having a difficult time with their kids, people have professional and interpersonal issues they're trying to work through. There's something universally human about all these people that are trying to do this impossible thing.

Do you write the show with the actors in mind?

I began working on this over three years ago. In the initial draft I tried to focus on the truth of the characters themselves and building their inner lives and backstories without necessarily trying to do that with particular actors in mind. I wanted to remain as open minded as possible to what the characters were telling me they wanted to be. But as they really began to form certainly Sean and Natascha were people that came to mind as really perfect for what I needed to achieve with these two roles. Luckily they were both willing to go on this journey with us.

Why did you decide to set this in a relatively familiar world, as opposed to setting it fifty years hence and making it super futuristic?

I set it in the near future, a little over a decade from now, because we wanted to envision a world in which we got to Mars sooner as opposed to later. The early 2030s is about as soon as we could possibly get there, if we really dedicated ourselves to this mission now. What we're trying to do is say "This is within arm's reach, let's not think about it as some distant things but something all of us might see in the next decade and a half."

A lot of time and effort has gone into designing the tech that will exist 15 years from now. Tell us a little about the process for that.

When you're envisioning the future, even if it's only 13 years from now, a lot can change. What we tried to do is not necessarily tackle every last bit of the way that culture and technology will change in the next thirteen years, but focus on a few key areas so we would feel that future but not become a distraction, or drive us insane by trying to tackle every single detail. We wanted to pick a few areas and do them really, really well. The areas that spoke to us most were cars and communication devices. We've been working with Amy Webb and others who speculate that in the early 2030s at least 50 percent of cars will be autonomous and electric. You see that reflected in the show. One of the examples if Laz's car. We actually worked with a company in that case to build upon one of their future prototypes thinking about, if this was a self-driving autonomous car what would it look like? And not just the exterior, where you see that very smooth skin and light bands circumferencing the car where all the sensors and cameras would be, but also the interior - if you want to have the options to both drive or not drive, perhaps you have a driver's seat that can swivel and face the back, when the car is driving itself. Every last detail of that car had to be designed the way an actual car is. On the communications side we're really looking at people having customised kits. It might be an earbud, it might be a bracelet, it might be augmented reality glasses or a mixture of those. We think that people won't actually have just one smart phone, they'll have multiple devices that they mix and match depending on what they want their experience to be. The AR glasses are something a lot of futurists and people working on communications think we'll be moving towards quite quickly to the point where they are ubiquitous in the next decade or so. AR technology already exists. The question now is how it will integrate into our lives. The ultimate goal is to have characters use these things in a way that feels totally normal to them. Technology integrates itself into our lives pretty quickly. None of us are looking down at our phones saying, "God, look at this magical box!" It feels normal to us.

We live in a world of finite resources and finite money. Should we be striving to go to Mars?

You could say we live in a world of finite money, but I don't necessarily see the world that way. That's only true if you define human existence through money. Really when it comes to our imagination, our determination, our will to accomplish things, it's deeper than money. We cannot be stopped doing that which we set out to achieve. In a practical sense you can say it will require money but if the will is there by our species to get to another planet we can make it happen. I do think we should do it. The story of The First is not just the story of going to Mars in the 2030s. It's an ancient story. It's the story of a species from its earliest moments hundreds of thousands of years ago was driven not just by necessity but also curiosity, to see what was over the horizon. We've traversed the entire world in the process. We've left our cave, we've left our continents, we've climbed the highest mountains, we've gone to the Moon… Mars is simply the next step in that story. It's our destiny. We're drawn to it, we're driven to it, there's a need in us to grapple that which we do not know and to understand it. Mars is part of that longer journey.