Interview with Adam Hills for Stand Up To Cancer 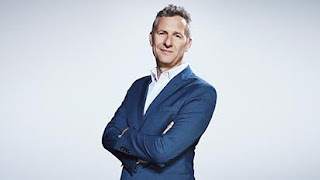 Stand Up To Cancer is back again. It feels like it's become a real TV fixture in a relatively short time, doesn't it?

It does, it feels like it's become one of those things that's just part of the TV landscape. What I love most about it is that my daughter came home from school a few months back and said they'd had a cake sale to raise money for Stand Up To Cancer. But she said it in a way that was so matter-of-fact, like "You know, Stand Up To Cancer. We all know what that is!" It's become one of those names, one of those brands or whatever you want to call it, that sounds like it's been around forever.

As with a lot of live TV, it's pretty anarchic. What kind of preparation will you do beforehand?

I've learned the secret of hosting a great live TV show – stand directly next to Davina McCall. Everything I've learned about doing Stand Up To Cancer I've learned from her. And Alan, to be fair. The preparation is: watch the clips, and be ready for anything. Have a plan mapped out, and be prepared to ditch it at any moment. At one point, a couple of years ago, Davina and I had to talk off the back of one of the short films, and she said to me "You need to watch this. Make sure you're watching it. Be aware of what's going on." And it was such a heart-wrenching clip. We were meant to do a comedy clip after it, and Davina just looked at me and said "We can't do comedy, just follow me." And we were both just genuine off the back of it. So I guess the only way to prepare for that kind of show is to be prepared to throw your plan out of the window at any second.

So do you find it difficult to keep it together during the personal stories that people film?

Yeah, and what I've learned from Davina is to own that. Don't try and pretend you're not affected by it. I figure when I'm doing something like this I'm as much an audience member as the people at home. If you see a clip that has left you in tears, don't pretend that it hasn't, because that's what people at home are like as well. So just go with that emotion, don't try and cover it over, and don't just jump straight to a comedy sketch. As a host on this show, you go through the same rollercoaster of emotions as the viewers do.

You've talked about moments when comedy doesn't seem quite the right response, but in general, do you see humour as an important way of dealing with some of the issues raised in the show?

Oh, absolutely. That's why we have a sense of humour. I think it helps us deal with horrific things going on in the world, like natural disasters or like losing loved ones to cancer. You deal with it with a sense of humour. That's what we provide on the night. Obviously the show is all about raising money, and we need to tell those stories, you want people to be moved, but you want them to find a way through it, so as much as we're raising money, we're also a bizarre coping mechanism. We want it to be funny and moving and real.

Do you think your background as a stand-up helps with the live element of the show? Does that make you less nervous about going into the bear pit, because you've done it so many times before?

Oh, absolutely. In a way it's a bit easier than stand-up, because the script is right there in front of you on the autocue. But it's harder because you've got a whole different range of emotions to deal with. There was an amazing moment the last time we did Stand Up To Cancer. I was standing next to Alan, and he launched into a comedy routine when all of a sudden the autocue just blanked out. And he did not skip a beat, he still nailed it word-for-word. I think that's where the stand-up skills come in, when something goes wrong – the ability to think on your feet and make it look seamless.

You'll be without Davina this year, but are you looking forward to being reunited with Alan?

Oh, absolutely. We've all formed a real bond doing these shows, because you go through such a rollercoaster of emotions. There aren't too many people I've stood next to on live TV whilst I've been in tears. In fact, Davina and Alan might be the only two. And I know Maya [Jama, co-presenter this year]. She's been on The Last Leg, and she was absolutely brilliant. She absolutely knows what she's doing, when it comes to presenting and being in front of the camera, and it'll be good to have a fresh set of eyes on the whole thing as well. I think it'll be a really bonding experience for the three of us.

What have been your favourite bits of Stand Up To Cancer in the past?

Oh wow! I just have weird flashes popping into my head, of me nude, out the front of Channel 4, Noel Gallagher singing a tribute to Caroline Aherne, me playing the drums on John Legend's bum. The striptease on stage with Alex and Josh. A bit that Steve Coogan did a couple of years ago. It's just little flashes that pop into my head of things that have happened over the last few years. All of these little moments intermingled with the short films that we've shown – I still remember moments of those. Those moments really burn into your memory. The highs and the lows. The rollercoaster. The beautiful stuff and the touching stuff and the ecstatic stuff all rolled into one.

Everyone's lives have been affected by cancer, and you're no exception, are you?

Not at all. The first year that I did it, I did a piece to camera about my dad who had passed away. He had stomach cancer when he was in his 50s, and he had it treated, and then he got leukaemia in 2011 as a result of the treatment. It was really raw for me, when I first did Stand Up To Cancer, and it still is. Everyone associated with the show has a personal connection to cancer in some way.

What can you tell us about what's in store on the night itself?

Oooh. I can't really give too much away. There will be another Celebrity Gogglebox, as per… and lots of surprises, lots of celebrities. We're trying to balance the entertainment and the heartstrings, and the clips that we show will be really effective and powerful. And in between, what I want to make sure we get across is the positivity. People can feel hopeless about cancer. I want people to donate because they can see that we are achieving something, and they can see that there is a light at the end of this tunnel. So for me it's not just about the heart-wrenching stories, it's about celebrating what we've achieved, and what we can achieve with something like Stand Up To Cancer.

Will you be wearing your rather attractive red union jack G-string just in case a large enough donation comes in?

I hadn't considered it, but now you say it, I might just do it for luck anyway. I think everyone should wear an attractive Union Jack G-string at all times, because you never know when you'll need it.

As well as stripping, you've also shaved your head for Stand Up To Cancer. Is there anything you wouldn't do for a big enough donation?