This Morning’s 30th show opens with huge stunt with the help of Dr Who, The Prime Minister and The Red Devils 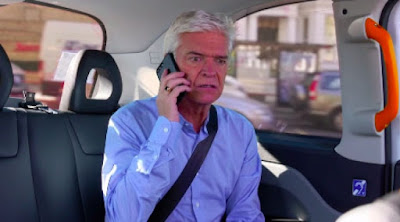 Viewers were treated to special footage from the very start of today’s 30th anniversary show.

As This Morning began, host Phillip Schofield was seen in the back of a cab stuck in a traffic jam trying to get to the studio. Warning his co-host Holly Willoughby that he might miss the start of the special show, he explain he needed help and warned ‘be quick’. Holly then set about making a few calls.

First to learn of a 30th This Morning special potentially without Phillip, Dermot O’Leary said to Holly, ‘What? 30th with no Phillip… not on my watch! I’ll call in some favours’.

With the help of Keith Lemon, Prime Minister Theresa May called Phillip back directly.  Theresa said, “It’s This Morning’s 30th birthday, you absolutely have to be there… I know just the people who can help you.”

Directing him to a Red Devils sign, the PM signed off saying, “Remember Phillip, the nations going to be watching… good luck!”

Joining forces with the Red Devils, Phillip is seen getting on a plane to fly across town before jumping out of the plane and sky diving to arrive at the This Morning studios at Television Centre just in time. Holly standing outside with her hands in the air, Holly said “What time do you call this?”

Phillip later thanked all involved to help get him to the special show on time, and the 30th party started with a performance from The Bootleg Beatles to reference its Liverpool roots, and then had a special studio audience packed with viewers who’s lives This Morning has saved or changed in some way.