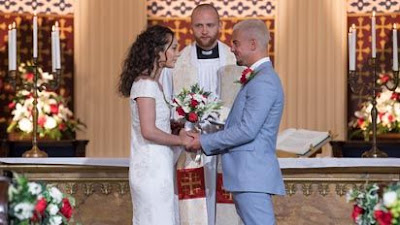 In a special episode, Hollyoaks explores Cleo’s ongoing battle with bulimia and the repercussions it has on her health. Having worked closely with the charity BEAT throughout this storyline, Nadine Mulkerrin who plays Cleo recently filmed a short documentary with the charity. Nadine met with BEAT ambassadors to discuss their own personal battles with eating disorders.

Throughout World Mental Health Week Hollyoaks will be sharing ambassador experiences across their social pages to highlight the importance of opening up about mental health with a focus on eating disorders.

During the episode, Cleo recalls every detail of her wedding day from the second she wakes, to walking down the aisle, to her psychiatrist Farrah. She tells her how excited she felt about becoming Mrs Dexter.

Farrah interrupts her story, and it is revealed Cleo has only been telling lies, as she sits in a hospital bed, she eventually admits the true sequence of events. Setting her alarm for 4:00am, she ran for hours despite her blisters, she used whitener to cover her rotting teeth, and makeup to cover her bruises. She felt terrified and disgusted by a bacon butty offered to her by Nana McQueen, but couldn’t stop herself eating the whole thing. She ran upstairs to make herself sick, admitting that purging gives her a sense of relief, before the guilt and shame takes over.

As she had lost so much weight her wedding dress no longer fit and she had to improvise by pinning back, terrified that someone might notice. Barely managing to stand she held tightly onto her auntie Myra as she walked down the aisle. Her heart started pounding, she felt sick and sweaty, only just managing to keep it together for half the vows.

Breaking down to Farrah, Cleo admits it should have been the most amazing moment in her life, but then everything started fading away…

Cleo’s Bulimia: Real Life stories will be available to watch on Hollyoaks Official You Tube, October 10th.
Posted by JD at 07:58

Email ThisBlogThis!Share to TwitterShare to FacebookShare to Pinterest
Labels: Hollyoaks