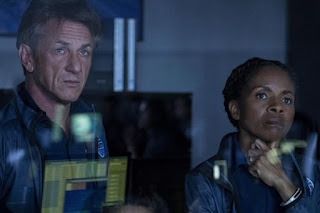 Tell us a bit about The First.

The First chronicles the first human mission to Mars. While the concept of Mars looms large throughout the season, the majority of the these eight episodes focus on the cost of getting to the starting line, on the astronauts embarking on the inaugural mission, and on the colleagues and loved ones they will be leaving behind.

What makes the show unique?

The First is a deeply personal human drama with a science fiction premise. Straddling those two worlds is atypical from what you'd expect from a space-themed show. Furthermore the project was produced more like an eight hour film than an episodic TV series. The differences in terms of performance, pacing, production design, music, VFX and cinematography are obvious from the opening frame.

Why is a show like The First important today?

The First is optimistic to its core. It is one of the only big budget modern TV series that doesn't harness negativity – typically in the form of crime, violence or drugs – to achieve its narrative goals. The First is about real people, flawed as they may be, working together to achieve something extraordinary.

People might go into The First thinking it's a sci-fi drama on Mars, but it's a lot cleverer and subtler than that. What was your reasoning for showing this specific story in this specific way?

In the not too distant future, a team of real life explorers will travel to Mars and it will instantly become the greatest pioneering achievement in human history. But these people will risk their lives, leave everything and everyone they've ever known behind, in an attempt to evolve human beings into an multi-planetary species. This all sounds like science fiction but it's reality. This will happen. Probably in the next 15 to 20 years. First and foremost, our show tells the story of those as they navigate the perilous waters of life in an attempt to do something greater than themselves. The show does its best to approximate what that first mission will look like.

The show creates a really believable near future. All the tech is just that bit more advanced than what we have now. What was the process for creating that environment?

It took years of research and dozens of real world consultants to help us flesh out what the near future would look like and how it would work. Before we looked forward, however, we decided to look back. The show takes place 13 years from now and yet we began the process of future prediction by analysing what the world looked like 13 year ago. We studied med tech, cars, phones, computers, wearables, architecture, and fashion and found that some of the most practical and visible advancements between 2005 and 2018 had to do with cars and communication. Once that analysis was complete our next challenge was to imagine the leap between 2018 and 2031, and for the most part we honed in on those same two fields: cars and coms. With the help of a team of extraordinarily talented production, prop, and concept designers, we developed several autonomous electric vehicles and a suite of interactive AR wearables in the form of glasses and ear buds to tell the story of 2031. Most of our near future communication predictions, while subtle, incorporate broad scale voice activation, augmented reality (vision) and bone conduction technology (sound) along with a sweeping range of environmental smart tech all of which are in early phases of real world development today.

Do you think humans will ever colonise Mars? And do you think we should?