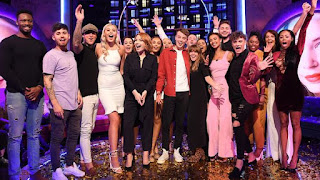 It's the final day in The Circle.

Yesterday, five became four when Harry received the lowest rating and was immediately blocked from the game.

Alert - the final ratings will determine the winner of The Circle. All of the players feel reflective as they get ready to finally meet each other after three weeks in the game.

Dan is first to arrive at the group dinner and admits to feeling 'more and more nervous.' Alex is second to arrive and Dan smiles 'Freddie?' Alex shakes his head and explains who he is and calls Dan 'mate.' 'What the f**k, I'm livid, I've been taken for a fool, I'm too trusting,' Dan exclaims.

Alex explains why he chose to play the game as a cat fish: 'I came in here to develop a character from scratch, I wanted to raise awareness that people on social media aren't real, I wanted to detach myself from who I am.' Sian is next diner to arrive and like Dan, shouts, 'Freds!?' then quickly realises and says, 'Kate? We were right.'

Alex tells Sian that he wanted to detach himself from his face so used his girlfriend's profile picture – Dan looks awkward.

Sian tells them that she gets 'prejudged' for her looks as a '6ft blonde girl' and initially used more 'natural' profile pictures 'to see if people will like me for my personality'. She reminds them that they have been playing a game and 'should 'take it on the chin.' 'He'll take it on the chin or he'll chin me' Alex quips.

Last to arrive is Freddie beaming, 'Surprise!!' He hugs all the players and explains his reasons for playing it straight: 'I get prejudged for my sexuality', adding that straight people don't get judged for being straight. He then focusses on Alex and Dan. 'You weren't just wanking over a 57 year old – you were wanking over a geezer,' laughs Freddie before asking how Dan and Alex feel.

Alex: 'I came in and immediately started being fake, then this guy changed my life and has been an inspiration for me.' Dan explains that it was Sian who 'talked me round' when he had doubts about 'Kate' and posed his Killer Question, 'are you a cat fish?'

Freddie says that Kate's/Alex's 'fence thing' annoyed him and Alex says he was just being honest.

Dan tells Alex that he is sorry for how he initially reacted. 'I'm always gonna call you Kate though,' Freddie grins.

In the live studio, presenters Alice Levine and Maya Jama introduce the four finalists Freddie, Alex, Sian and Dan to the studio.

Freddie explained his reasons for not revealing his sexuality, being pre-judged as a gay man.

On meeting Dan, Alex said: It was very overwhelming, he's massive and he was quite angry. On his Kate persona, 'I couldn't keep being this fake personality, I had to be my own personality and it seemed to pay off.'

Alex's girlfriend Mille on Alex using her image as 'Kate': 'I got used to it, it's a static image, he was himself, he has heart of gold and that showed. I wanted him to drop it, I love Dan, he's a lovely person.'

Alex on feeling guilty and almost coming clean: 'I wrote it all down and was going to send it. I learnt a lot about myself which I wouldn't have done if I wasn't a fake character.'

Sian on Freddie: 'He's on my vibe, we just got on…we just bonded so early. With Scotty, I'd been lied to by guys, I got you back by sending you home. OK Freddie's gay, Kate's a boy and Dan is fit.'

Dan on meeting Kate/Alex: 'being Direct Dan: 'If I was in that situation in the normal world I would have just left, but that wasn't an option.' On his initial suspicions about Kate: 'I decided that even if Kate wasn't Kate, when I saw the person in from in front of me it was different. With Freddie his lie was easily palatable, (the relationship) it wasn't so personal, still a massive shock though but at least he's the same sex, he was the lesser of the situation.' But Dan confirmed that he'd be happy to meet up with Alex in the outside world.

Maya and Alice announce the final twist – the public have been voting for their winner.Their final ratings have seen Alex become the winner of the Circle and taking home £50,000… AND in a shock twist Alex is also crowned winner of the Viewer vote winning a further £25,000.